CHICAGO — December 10, 2013 — We are pleased to announce the appointment of John Mecklin as editor of the Bulletin of the Atomic Scientists. Mecklin, previously the Bulletin’s deputy editor, will assume the top editorial position on January 1, 2014, succeeding Mindy Kay Bricker, who has been editor since 2010. As deputy editor, Mecklin had primary responsibility for the Bulletin’s coverage of biological and chemical weapons and emerging threats in a variety of fields, including the life sciences. Among other editorial projects, he conceived and edited the Bulletin's successful three-issue series, Nuclear Exit, which examines the complex questions faced by Germany, France and the United States when considering the use of commercial nuclear power in the wake of the Fukushima disaster.

Kennette Benedict, executive director and publisher, welcomed Mecklin to his new role with enthusiasm: “We are very pleased that John has accepted this leadership position. His experience and wisdom will contribute to deepening the Bulletin’s coverage of complex science and security issues. I look forward to working with him as he builds on the innovations introduced by Mindy Bricker.”

Mecklin, who holds a bachelor’s degree in psychology from Indiana University and a master’s degree in public administration from Harvard University’s Kennedy School of Government, has an extensive background as an editor and a reporter for print and digital media. He has written regularly for the Columbia Journalism Review, and before joining the Bulletin, he served as the editor in chief of Miller-McCune magazine (since renamed Pacific Standard), the top editor of High Country News, an award-winning magazine that covers the politics and environment of the American West, and an investigative reporter for the Houston Post.

"The Bulletin has a storied history of explaining – in lively articles discussed at top levels of government and around the kitchen table – what must be done to keep the world's most dangerous technologies in check," Mecklin said. "I'm honored to have the opportunity to help lead it into a future of expanded reach and impact around the world."

About the Bulletin of the Atomic Scientists: Established in 1945 by scientists, engineers, and other experts who created the atomic bomb as part of the Manhattan Project, the Bulletin of the Atomic Scientists informs the public about threats to the survival and development of humanity from nuclear weapons, climate change, chemical weapons, and emerging technologies in the life sciences. Through an award-winning digital journal, its website, and the storied Doomsday Clock, the Bulletin reaches policy leaders and audiences around the world with information and analysis about efforts to address technological dangers and prevent catastrophe.

The Bulletin won a 2007 National Magazine Award for General Excellence. 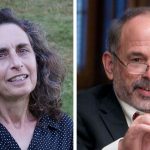