The setting of the Doomsday Clock receives unprecedented global attention each year, enabling the Bulletin’s impact on a global conversation as well.  The 2017 and 2018 events were livestreamed and generated more than 2 million views, more than 10,000 articles and television mentions within the first two weeks, and op-eds, editorials and articles in influential outlets like the New York Times, Washington Post, Financial Times; in popular outlets such as People Magazine and TMZ; and even a supportive Facebook post from AKON the rapper to his 50 million followers.

In 2017, the Doomsday Clock was mentioned in television shows from “Dr. Who” to “Jeopardy!”; in February, musician and producer Underbelly released “Midnight in a Broken World,” referencing the Doomsday Clock; and the Clock is often found in political cartoons. In the recently released movie Justice League, Batman complained to Wonder Woman that “mankind acts like the Doomsday Clock has a snooze button.”  The cultural reach and relevance of the Clock stops the news cycle and generates a global conversation, one that carries on across the year, and around the globe.

To learn more about investing in our 2019 global outreach and Clock announcement, contact our Development Director, Colleen McElligott, at [email protected] or call 773.834.2308. 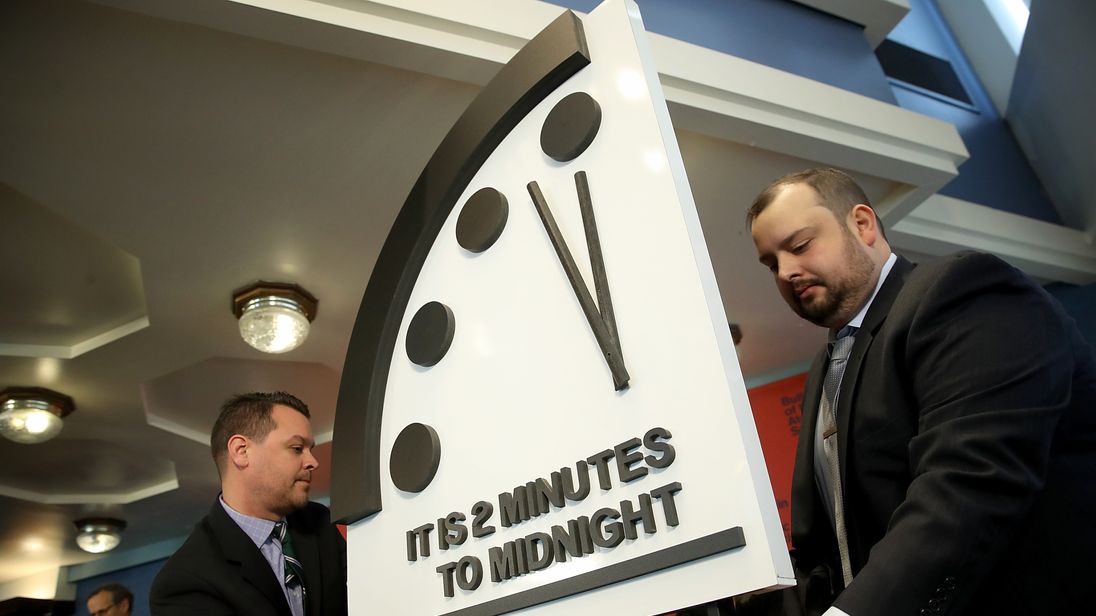 The Bulletin is developing new programming to include its expanding circle of experts. To deepen relationships and better connect our community to the future work of the Bulletin, we will host invitational dinners, special events, webinars, and teleconferences. These gatherings will feature experts from a variety of disciplines, in partnership with others who have expertise in the relevant fields.

The new and expanded programming will provide access to the interested public around the world who remain committed to getting and staying active and engaged. In 2018, our programming will build on the success of events we have sponsored in previous years.

To learn more about investing in upcoming Public Programming and other events, contact our Development Director, Colleen McElligott, at [email protected] or call 773.834.2308.

The Bulletin continues its 70+ year tradition of supporting the public with the best analysis and science available, but it must continue to evolve its platforms to successfully engage larger and younger audiences. This means that the Bulletin’s technology must facilitate a high degree of interactivity—and the new website you are reading is just one of our efforts in that regard.

What Bulletin leaders knew 70 years ago, and what remains true today, is that in order to ensure a safe and secure future, an engaged, mobilized and educated citizenry must insist that leaders make wise choices. We must cultivate audiences of all ages, especially from outside the scientific community, to understand that their active engagement is required and makes a difference.

To learn more about investing in Editorial Content Support, contact our Development Director, Colleen McElligott, at [email protected] or call 773.834.2308.

The Bulletin is developing the Arts Science Initiative to create a twenty-first century platform to attract artists and audiences from outside the scientific community who share its concern for the future of humanity and for how science and technological advancement can be better managed.  In keeping with the Bulletin's history, the goal of the Initiative is to capture the public’s imagination, ignite citizen engagement, and encourage creative evidence-based solutions to humanity’s greatest threats.

Future programing is now under development and will be featured soon. Recent activities include: a collaboration and art installation by Ellen Sandor and (art)n at the Weinberg/Newton Gallery (May 2018); and a collaboration with the Museum of Science and Industry for the exhibit Turn Back the Clock (Launched June 2017-Open Through 2018).