Another “Groundhog Day” has dawned for Yucca Mountain, which is once again being proposed as a geologic repository for the United States’ highly radioactive waste. President Trump’s budget request includes $120 million to restart the licensing process, and the House is considering legislation to mandate a Yucca Mountain reboot. But the only thing headed for deep burial anytime soon is the nascent “consent-based” approach to siting—in which nuclear waste repositories would be sited only in places where the host community and all affected units of government are willing to accept them.

Designated by Congress in 1987 as the nation’s only potential repository, the Yucca Mountain site in Nevada was in contention until 2011, when President Obama ended funding for the program. “Over the past 30 years, not much has changed,” write former Nuclear Regulatory Commission chairperson Allison Macfarlane, now at George Washington University, and Rod Ewing of Stanford’s Center for International Security and Cooperation (former and current members, respectively, of the Bulletin’s Science and Security Board) in the journal Science. “But going forward—or not—with Yucca Mountain will not address the systemic problems of the US nuclear waste program, and this may well lead to continued failure.”

Foremost among those problems is the amount of time it takes to plan, license, and build a nuclear repository. Political opposition can derail the process at any step along the way. Macfarlane and Ewing recommend a strategy removed from the political process, with nuclear waste managed by a utility-owned nonprofit organization.

Although Macfarlane and Ewing’s editorial is titled “Déjà vu for U.S. nuclear waste,” and Yucca Mountain seems to be caught in a time loop, there has been at least one significant shift in policy during the past six months: The White House is retreating from the consent-based siting approach begun by the Obama administration, which was one of the key strategies recommended in the 2012 final report of the Blue Ribbon Commission on America’s Nuclear Future (of which Macfarlane was a member).

Consent-based siting and utility-owned management have been successful in countries such as Canada, Finland, and Sweden, which are moving ahead with the construction of permanent nuclear waste disposal facilities. The United States, however, appears to be headed in the opposite direction: The Department of Energy has taken down the section of its website dedicated to consent-based siting and replaced it with a notice stating: “We are currently updating our website to reflect the Department’s priorities under the leadership of President Trump and Secretary Perry.” 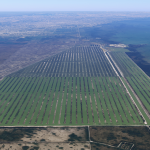