Special issue on missile defense, and a brand new website 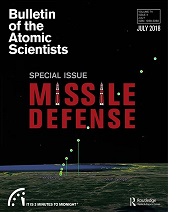 The July/August issue is now available!
Driven by varying (mis)perceptions of the motives and capabilities of their adversaries, the United States, China, and Russia are pursuing their own versions of missile defenses. In this issue, we look at this expensive, ineffective, and potentially destabilizing international pursuit with the help of an extraordinary lineup of the world’s top missile defense experts. This special issue has been made entirely free-access until September, 2018. Explore the special issue on missile defense and visit our new website for what you need to know about the issues that matter.

Missile Defense, around the world and, perhaps, in space

Why a space-based missile interceptor system is not viable

China’s attitudes toward missile defense and its limitation

Deterrence and its discontents

The mythical benefits of military automation

Waste makes haste: How a campaign to speed up nuclear waste shipments shut down the WIPP long-term repository

The making of a non-proliferation law: A memoir