Why the Green New Deal may include nuclear power

Part of the bridge to zero emissions?

Editor’s note: This story was originally published by Grist. It appears here as part of the Climate Desk collaboration.

The Green New Deal has been championed by advocates for getting the United States running on purely renewable energy right away. Some 600 environmental groups had demanded the initiative set out to ban not just fossil fuels, but also nuclear, biomass power, and large-scale hydroelectricity. So when the resolution made its long-awaited debut on Thursday, it came as a surprise to some that the door was left open for nuclear power and even fossil fuels with carbon capture.

But it was likely the key to getting an impressive group of Democrats to get behind the deal. Senators Cory Booker, Kirsten Gillibrand, Kamala Harris, and Elizabeth Warren have signed up as co-sponsors, and all of them just happen to be running for president in 2020.

So just like that, the most aggressive climate policy proposal we’ve seen in years has the de facto backing of the Democratic party.

The Green New Deal doesn’t mention “nukes,” but it doesn’t use the words solar or wind, either. The non-binding resolution, unveiled by Representative Alexandria Ocasio-Cortez from New York and Senator Ed Markey from Massachusetts, calls for “clean, renewable, and zero-emission energy sources.” In wonk-speak, zero-emission is code for nuclear power or fossil fuels with carbon capture.

That conflicts with a factsheet found on Ocasio-Cortez’s website which says the deal “would not include creating new nuclear plants. It’s unclear if we will be able to decommission every nuclear plant within 10 years, but the plan is to transition off of nuclear and all fossil fuels as soon as possible.”

The factsheet disappeared from Ocasio-Cortez’s website on Thursday after the resolution was released.

This antinuclear stance might have been toned down to help get people who support nuclear into the coalition. Booker and Warren, for instance, have voted to fund research on advanced nuclear power. 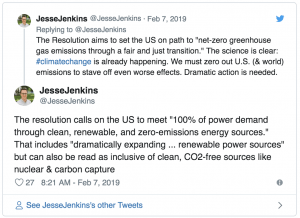 The evidence overwhelmingly suggests that we will need to rely on a variety of energy sources to make deep cuts to carbon emissions. Every scenario plotted by Intergovernmental Panel On Climate Change that keeps the world from warming more than 1.5 degrees Celsius requires nuclear energy, and most such scenarios require building a lot more of it. Hydropower—the most abundant source of renewable energy going—is important, too. Try to get rid of both nuclear and hydroelectricity, and good luck cutting emissions enough to avoid the worst climate change has to offer.

“The resolution is silent on any individual technology,” Senator Markey said during a press conference on Thursday. “We are open to whatever works.”

In spite of this agnostic stance, a wide range of green and lefty groups welcomed the resolution. Many mainstream environmental organizations had refrained from adding their signatures to the letter demanding the Green New Deal restrict energy options to wind and solar, so when it emerged Thursday, they praised it.

The loudest attacks appeared to come from the right. “It’s a socialist manifesto that lays out a laundry list of government giveaways, including guaranteed food, housing, college, and economic security even for those who refuse to work,” said Senator John Barrasso from Wyoming in a statement.

Conservatives have long feared that climate action was just a Trojan Horse for a bigger government with more social-welfare programs. Now, after voting for years to kill market-based climate policies, they’re getting a taste of just what they had feared.

Oh well – that’s the end of the Green New Deal, as far as I’m concerned. Nuclear power is NOT GREEN, NOT CLEAN, as everybody knows. Once this hypocrisy is introduced into “green thinking” then the game is up. Might as well let Michael Shellenberger and his mates write the policy. And I bet I’m not the only one who thinks this way.

I couldn’t agree more. Nuclear power, as it’s been done since it’s inception, means PLUTONIUM as a waste product. Here’s the Letter to the Editor of the Philadelphia Inquirer I wrote and they published in their Sunday paper June 17, 2018. ***** In Monday’s “Dialogue” page letter (6-4-2018) by Martin Williams Jr., (Boilermakers Local 13) about nuclear power, he lists only the advantages (tax revenue, jobs, no CO2 waste). However, I must point out, with emphasis, that Mr. Williams makes absolutely NO MENTION of the waste product that IS generated…PLUTONIUM. According to the “Handbook of Chemistry and Physics” (CRC Press),… Read more »

Not all scenarios in the IPCC SR 1.5 report contain expansion of nuclear power. There are around 90 scenarios assessed, and actually quite a few phase out nuclear power. The IPCC gave policy makers a wide choice. Four scenarios were taken up into the policy summary of the report as “illustrative scenarios” — and by a strange whim these indeed contain nuclear expansion. However, the plotted nuclear expansion of 150% or 500% before 2050 is simply physically impossible, which should come as a warning to policy makers. The IPCC SR 1.5 contains a few important warnings about any potential role… Read more »

The objections to nuclear power are like people who object to the modern planet’s UN and world governing system which has kept the peace-if barely-and kept the nations from murdering each other, since the end of WWII. If we allowed that war is a bad thing and that, therefore, any peace resulting from some country’s victory in a war in which millions of innocents were killed-then the answer would be to always surrender to superior, brutal force, regardless of how evil and detrimental it is. The USA would have instantly surrendered to the Japanese Empire as the British also would… Read more »

The Fairewinds Energy Education organization has a very instructive video about nuclear power’s inability to appreciably help out with the climate crisis. It’s called “Smokescreen,” and is only about 5 mins. long, yet brings out the obvious:
https://www.fairewinds.org/nuclear-energy-education//smokescreen
It is amazing that we have so many brilliant scientists and others crunching numbers on climate models; yet so many demonstrate a total ignorance of the 4 arithmetic functions. “Do the Math!” as Bill McKibbin says.

The Green New Deal’s acceptance of nuclear power is an improvement. It shows that the GND’s architects take climate change seriously, and understand that avoiding its worst effects requires every technology in the toolbox. Although nuclear power plants are not risk-free, the harm they have caused is many orders of magnitude less than that caused by fossil fuels, even if climate change is not counted. “In 2010, it is estimated that fine particle pollution from US coal plants resulted in 13,200 deaths, 9,700 hospitalizations, and 20,000 heart attacks.” . Nuclear power’s opponents are good at nightmare scenarios, but for me… Read more »

The wide misconception that nuclear power is too dangerous to be used is a tragic misconception. The data, the real facts, show that nuclear power is the safest of all the major sources of electricity, by a wide margin. Yes, there are potential hazards but our society has dealt with those far, far better than with the hazards of hydropower (from flooding, when dams break) or from coal, the deadliest among all the sources of electricity. Moreover if we were to do the R&D to find a suitable method of recycling the nuclear waste, we would 1)solve the storage problem… Read more »

If you want a nuclear power station and start thinking about it now, you will get electricity from it in the 2030s. You can have a lot of solar within months and a big wind power plant in a few years. More efficient lamps, appliances, office machinery can be in place in something between minutes and a couple of years.
If you think climate change is urgent, go for renewables and efficiency.
If you think there is a lot of time, go for nuclear.