“We strike because our world leaders haven’t acknowledged, prioritized, or properly addressed the climate crisis.”

The Bulletin of the Atomic Scientists has named Haven Coleman as its 2019 Leonard M. Rieser Award recipient for her contributions to a March 7 essay “Adults won’t take climate change seriously. So we, the youth, are forced to strike.” The article was selected by the Bulletin’s editorial team from its “Voices of Tomorrow” column–a column that promotes rising experts who write with distinction on topics including nuclear risk, climate change, and disruptive technologies.

Coleman and co-authors were the lead organizers of US Youth Climate Strike, part of a global student movement inspired by 16-year-old climate activist Greta Thunberg’s weekly school strikes in Sweden and other European countries. In their essay, they passionately describe their frustration with the utter lack of commitment that world leaders have demonstrated when confronting the climate crisis.

“This article is an absolutely stirring essay that calls not just a generation, but a world to action to diminish the dire threat that unchecked climate change poses to humanity,” Bulletin Editor-in-Chief John Mecklin said. “The eloquence and urgency exemplify the Bulletin tradition of speaking truth to power and made it easy to name this piece the winner of this year’s Rieser Award.”

The Bulletin is also pleased to announce an Honorable Mention for the first time in the history of the Rieser Award. That honor goes to Ivan Andriushin, Cecilia Eiroa-Lledo, Patricia Schuster, and Evgenii Varseev for their essay “Nuclear power and global climate change.” It is part of a cross-country collaboration from the U.S.-Russia Young Professionals Nuclear Forum, a forum established by Siegfried Hecker and Alla Kassianova to encourage dialogue on critical nuclear issues of concern to both countries.

The Rieser Award is the capstone of the Bulletin’s Next Generation Program, created to ensure that new voices, steeped in science and public policy, have a trusted platform from which to address existential challenges. It is named for physicist Leonard M. Rieser (1922-1998), board chair at the Bulletin from 1984 until his death in 1998.

“Our hope for the Leonard Rieser Award is that it will inspire others to act, in whatever ways they can, to address today’s greatest threats to global security,” said Tim Rieser who, along with his brother Len and sister Abby, helped to establish the Rieser Award in their father’s honor. “By choosing this essay, the Bulletin is amplifying the voices of the next generation’s leaders, who recognize the gravity of the threat that climate change poses to the world they will inherit. If my father were alive today, he would share their sense of urgency and exasperation with the shameful inaction of today’s political leaders, and he would support the Global Climate Strike as a way to sound an alarm – much as he did when moving the hands of the Doomsday Clock.”

The Rieser Award includes a $1,000 cash prize and a one-year subscription to the Bulletin’s online magazine. More about the award, Leonard M. Rieser, previous recipients, and all Voices of Tomorrow authors, can be found here. 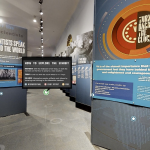 New story published in partnership with The New Yorker

Welcoming Scott Sagan to the Science and Security Board

The Bulletin partners with the Northwestern University Medill School

By Gayle Spinazze | Nuclear Risk, What’s New at the Bulletin