Why do so many Pentagon projects go so far over budget? The Jetsons explain. 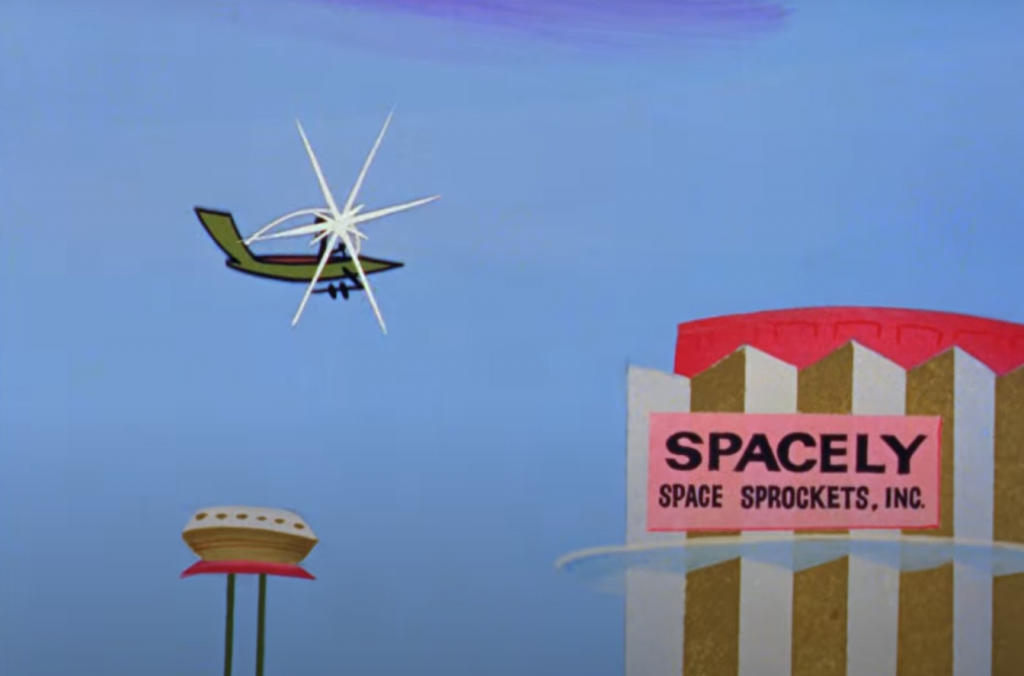 A screen capture from The Jetsons title sequence. Credit: WarnerArchive via Youtube.

Let’s say you’re remodeling the kitchen and you hire a general contractor to manage the project. This saves you the bother of finding all the tradespeople. After all, you don’t want to manage every detail. But do you also let your contractor choose the refrigerator, oven, and microwave for you, without worrying about your specific needs or the best price?

Now imagine the general contractor is the head of a federal agency in the US government, working for the taxpayers to manage the people and run the show. And just as you wouldn’t let the general contractor pick an appliance without considering costs and a variety of brands, you don’t want the agency head handing out procurement contracts without competition.

Taxpayer money is being used to buy those goods. Every American should be concerned whether their dollars are being well spent, and they deserve to pay only the best price on the product that meets their government’s needs.

So how does the process work and why do so many Pentagon contracts go over budget? And why are so many defense contracts—including the huge contract for providing a new generation of intercontinental ballistic missiles—given on a “sole source” basis, without competitive bidding? To keep this understandable and well away from any real-world classified examples, let’s borrow from that classic, yet futuristic, 1960s cartoon: The Jetsons.

Sprockets for the Space Force. The show is set in 2062. George Jetson, the main character, is a salesman for Spacely Space Sprockets. The company’s motto is catchy: “The sprocket that’s easy on your pocket!” From this we can infer that the corporation is attempting to drive business to its product by offering it at a reasonable price, within the budget of many customers.

Now let’s fast forward (or backward?) to the year 2020 and imagine George is looking at a potential new government customer for sprockets, the United States Space Force. The Space Force could be a huge customer for Spacely Space Sprockets, and George Jetson is determined to capture that market for his company.

George hasn’t sold to the federal government before, but he knows that a hallmark of government contracting is competition. The first stop on his quest to educate himself is the Competition in Contracting Act, which dates back to the early 1980s and was enacted to increase both the number of qualified competitors and the amount of savings the government (and taxpayers) could expect to realize. The goal of the act is summed up thus: “The Contracting Officer must promote competition to maximum extent practicable.”

However, exceptions are sometimes necessary in the complex world of buying goods for the federal government. This is especially true in the highly specialized market related to weapon systems. Sprockets are a system component, and George is likely pitching a business-to-business solution to one or more prime contractors to supply sprockets for the next big Space Force procurement program. But George, looking for every opportunity to write purchase orders, is also keen to sell his product directly to Space Force for its spare parts inventory.

To do that, under the Competition in Contracting Act, Spacely Space Sprockets must compete against its peers in the sprocket business as well as prime contractors that may pressure their subcontractors to drive down costs and make cheap spare sprockets part of the prime contract.

From the position of the Space Force in this fictional scenario, how does the contracting officer who works for the government make sure he or she is getting the best deal during negotiations with George Jetson? George would like to have Spacely Space Sprockets be the sole provider of sprockets to the Space Force spare parts inventory and is worried that, in a normal competition, his rival, Cogswell’s Cosmic Cogs, may underbid him and end his chance to corner this market. But the Space Force wants the best product at the most reasonable cost, and the contracting officer is legally obligated to maximize competition.

But there’s an exception: sole-source procurements are allowed if the head of the agency has made a written declaration of that decision and has cited a specific statutory or regulatory authority to limit competition.

Exceptions. And exceptions to the exceptions. So, if the contracting officer wants to cut off competition and give Spacely Space Sprockets a sole-source contract, what would the head of Space Force have to cite as a credible reason to limit competition? The regulations are laid out in the Federal Acquisition Regulation subpart 6.302, titled “Circumstances Permitting Other than Full and Open Competition.” Exceptions can be made and competition restricted when:

There are also exceptions to the exceptions, this being the byzantine world of government contracts. Effective March 17, 2020, for contracts awarded under the 8(a) Small Business set-aside program, contracting officers may now ignore the written justification for sole-source contracts worth less than $100 million—a substantial increase over the previous $22 million threshold.

So George Jetson, hoping to corner the market, will try to convince the contracting officer and the head of the agency that giving them a sole-source contract fits into one of these exceptions.

If George is successful and the Space Force gives him a sole-source contract for sprockets, what protections exist for the public interest and the taxpayers’ wallets? In the 1960s, Congress passed the so-called Truth in Negotiations Act, subsequently amended in the last 50 years and now renamed as the Truthful Cost or Pricing Data statute. As the new name lays out, the law requires contractors to submit cost or pricing data to the government. The fiscal year 2018 National Defense Authorization Act increased the threshold for submitting that additional information from contracts worth $750,000 to those worth $2 million or more.

Cost or pricing data is defined as any and all facts that a prudent buyer would believe could significantly affect price negotiations. This data may include vendor quotes, non-recurring costs, and trends in unit costs and must be certified by the bidder as “accurate, current, and complete.” The government, in turn, uses this information from the bidder to determine price reasonableness. One wrinkle that may benefit Spacely Space Sprockets is that theirs is a commercial product; there is no requirement for cost and pricing data on commercial products because it is assumed the market has previously established a fair and reasonable price.

RELATED:
What the new posture review says—and does not say—about the future of nuclear weapons

Back to the real world. How the government defines “commercial products” has recently been relaxed to a ludicrous point. Virtually anything sold to the government that is “of a type” to something sold commercially can now be exempted from disclosure of cost and pricing data. Is your company bidding on a fighter jet contract with the military? Well, there is a commercial market for aircraft, so your company can press for an exception to submitting cost and pricing data. It really is almost that simple (and insidious).

Also, the pressures of real-world mergers and acquisitions have dramatically telescoped the number of defense contractors in the last 25 years. The sad truth is there are fewer and fewer corporations that could be considered both responsible and responsive to the requirements of the highly complex contracts pursued in the defense sector. The government can end up with circumstances where there is only one responsive bidder.

The $85 billion sole-source missile. A recent example of contracting gone awry is the Ground Based Strategic Deterrent, a program to build the weapon that will eventually replace all of the United States’ nuclear intercontinental ballistic missiles. A Pentagon cost estimate states that the price tag will run to at least $85 billion. In the summer of 2019, Boeing dropped out of the competition and left Northrop Grumman as the only bidder. When there is only one bidder, it is harder to be sure the taxpayer is getting the best price or design.

Under most circumstances in recent history, taxpayers could be confident that the head of a federal agency would make any sole-source decision in their best interests. In a normal scenario, the agency head would take advice from the contracting officer, government contracts lawyers, acquisition officials, and other experts. After all, that official’s signature will remain a part of the public record of the procurement. But, in this moment in history, can any of us have that confidence in the procurement system?

Stop to think how many US agencies are run by someone in an “acting” capacity. What safeguards are there that people who have not gone through a normal vetting process, and who may be trying to curry favor in order to get the job permanently, will withstand external pressures when it comes to spending Americans’ tax dollars?

Unfortunately, the recent trend is toward less transparency and less competition in government contracting. Congress must exert its constitutionally-mandated oversight role to ensure that, as federal spending increases at an unprecedented pace, sole-source contracts—whether for five-dollar sprockets or billion-dollar missiles—are properly justified.

Welfare for companies that hold us hostage: we MUST have (X), or we are doomed! They extort that way. It feels like a victim/abuser relationship. Ever seen money decrease on military hardware spending? Space force? We have fully capable trident nuclear submarines, don’t we? Please show me the 6 billions in cuts to make room for the new stuff.

It is ironic that DoD is the agency responsible for updates and changes to the Federal Acquisitions Regulation (FAR). Most other agencies are stuck with the regulations which can make it difficult to avoid getting crap for services such as software/firmware development. If an agency gets a program which fails to deliver what was promised, that agency has the choice of rejecting the product and being sued (which can lead to having to pay the cost and court costs) or spending a lot of government employee time and money to work with the contractor to fix all the problems. With… Read more »