At the intersection of art and science: Amnesia Atómica NYC

The purpose of Amnesia Atómica NYC

ZERO NUKES served as the centerpiece for Amnesia Atómica NYC which included a series of public programs and events throughout the city designed to spotlight the work of activists, artists, and organizations involved in non-proliferation and disarmament.

Amnesia Atómica was curated by Pedro Alonzo, who specializes in ambitious artworks in public spaces. Inspiration for Amnesia Atómica was sparked at an incubator created by N Square, a network of innovators committed to ending the nuclear threat.

ZERO NUKES. Created by Pedro Reyes, this three-story inflatable mushroom cloud is a reminder that nuclear weapons continue to demand huge resources⁠—resources that can and should be better deployed to meet 21st century opportunities and challenges. The artist’s intentions are to raise public awareness, revitalize the once vibrant anti-nuclear community and, most importantly, put pressure on political leaders, policymakers, and global citizens by reminding them of the consequences of inaction.

Stockpile.  A new participatory work by Pedro Reyes in which a portion of 12,075 rocket shaped balloons—equivalent to size of the global nuclear arsenal—were handed out to the public daily.

Frieze Art Fair May 18-22.  The timing of Amnesia Atómica aligned with the Frieze Art Fair, a leading art fair that attracts artists and media worldwide. Pedro Reyes hosted two booths, one highlighting the history of anti-nuclear artwork, and a pop-up shop referencing the artist’s ZERO NUKES sculpture and directing attendees to Duffy Square.

Duffy Square kiosk takeover that offered information about Zero Nukes, the Frieze Art Fair, the Bulletin, and the Mobilization Expo. Two pop-up signs on the Square all week reinforced the message.

Information about all events was visible on digital kiosks throughout Manhattan.

The people who brought Amnesia Atómica to life

The Bulletin extends an enormous thanks to artist Pedro Reyes, curator Pedro Alonzo, Times Square Arts Alliance, the 13 organizations that joined the Bulletin in engaging with the public in Times Square during the Mobilization Expo, and its many financial supporters including the Bancel Foundation, Carnegie Corporation of New York, N Square, Abakanowicz Arts and Culture Charitable Foundation, David Rockefeller Fund, Lisa Tung and Spencer Glendon, Miner/Nagy Family, and The Prospect Hill Foundation, among others.

Alonzo is an independent curator who specializes in working with artists to develop ambitious artworks in public space.

Rachel Bronson is the President and CEO of the Bulletin of the Atomic Scientists and collaborated closely with Pedro Reyes, Pedro Alonzo, Jean Cooney, and partners and exhibitors to bring the multi-day multi-location set of events to fruition. Bronson was also present at and involved in the first presentation of Amnesia Atómica in Mexico City in 2019.

Beatrice Fihn is the Executive Director of the International Campaign to Abolish Nuclear Weapons (ICAN), the 2017 Nobel Peace Prize-winning campaign coalition that works to prohibit and eliminate nuclear weapons. She accepted the Nobel Peace Prize and delivered the Nobel Lecture in Oslo on behalf of the campaign.

Reyes is an artist and activist who has received international attention for his work addressing social, environmental, political, and educational issues. Reyes reframes complex issues in a playful, passionate, and accessible way.

Takeuchi is an activist, a third-generation Hiroshima survivor, and the producer of The Vow from Hiroshima (2019). Takeuchi grew up in Hiroshima and has made New York City her home for over 25 years as a media consultant.

Between May 17 and 24, 1.5 million people had the opportunity to experience the events of Amnesia Atómica NYC. Presenting Amnesia Atómica at Times Square allowed the Bulletin and other nuclear-focused organizations to engage in meaningful conversations with the public about reducing nuclear risk.

Thirty news outlets including The Art Newspaper, Frieze, Artnet News, and others published about Amnesia Atómica with vibrant headlines such as “ ‘No One Should Have the Power to Kill Us All’: Artist Pedro Reyes Is Mounting a Global Campaign for Nuclear Disarmament” and “Yes, that mushroom cloud balloon in Times Square is meant to make you stop and think.”

In an interview with Gothamist, Bulletin president and CEO Rachel Bronson explained the meaning and purpose behind Amnesia Atómica.

“What we’re trying to do is engage the public and give them ways to act, see how they can get engaged, talk to their leaders and our leaders to try to change the direction that we’re on,” Bronson said. “Because right now, we’re entering into an arms race 2.0. that everyone knows is dangerous and expensive, and really wasteful.”

Below are a few of the stories published about Amnesia Atómica about the exposition, including a sighting in the New York Times’ style section in which artist Natalie Kovacs wore a dress designed by Pedro Reyes to a local gala with the time of the Bulletin’s Doomsday Clock printed on her back:

WYNC, “A mushroom cloud balloon in Times Square is supposed to make you stop and think”

Artnet News, “‘No One Should Have the Power to Kill Us All’: Artist Pedro Reyes Is Mounting a Global Campaign for Nuclear Disarmament”

Frieze, “‘We Have Never Been so Close to Nuclear War’: Pedro Reyes at Frieze New York 2022”

Keywords: art and science
Topics: What’s New at the Bulletin 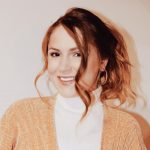 Sarah Starkey is brand manager at the Bulletin of the Atomic Scientists. She joined the Bulletin as the social media & analytics coordinator in... Read More

Gayle Spinazze is director, digital operations at the Bulletin of the Atomic Scientists. She joined the Bulletin as communications coordinator in May... Read More