The 2019 Novel Coronavirus (2019-nCoV) is a respiratory illness first identified in Wuhan City, China. Symptoms include fever, cough, and shortness of breath. The virus can be spread person-to-person in close proximity or from contact with contaminated surfaces.

The World Health Organization (WHO) has declared the coronavirus outbreak a pandemic and has named the disease caused by the virus COVID-19. It is related to other coronaviruses such as SARS and MERS, but is not the same virus.

"The virus enters the body through the nose, mouth or eyes, then attaches to cells in the airways that produce a protein called ACE2," according to the New York Times in its explainer "How Coronavirus Hijacks Your Cells."

Infection by COVID-19 is rarely fatal, according to the WHO.

"It can be more severe for some persons and can lead to pneumonia or breathing difficulties," reads a statement on the WHO's website. "Older people, and people with pre-existing medical conditions (such as, diabetes and heart disease) appear to be more vulnerable to becoming severely ill with the virus."

In March of 2020, large gatherings such as Austin's SXSW, Rome's marathon and St. Patrick's Day parades in Chicago, Dublin, and Boston were cancelled. Students were sent home early or classes went online at MIT,  Harvard University, and Cornell University.

"The WHO had not declared a pandemic since 2009," according to the New York Times, "when it gave that designation to a new strain of H1N1 influenza." (The Centers for Disease Control and Prevention (CDC) estimated that between 151,700 and 575,400 people worldwide died from H1N1.)

In April, 2020, the United States became the country with the most recorded COVID-19 cases, outpacing countries with larger populations. On April 9, the John Hopkins University reported 432,579 US cases and 14,830 deaths. Health officials recommended that people wear cloth masks and gloves when in public, in addition to social distancing and hand washing guidelines.

As of April 9, 2020, worldwide cases totaled 1,503,900, with 89,931 confirmed COVID-19 deaths, according to Johns Hopkins University. In New York City, the death toll exceeded the number of people killed at the terrorist attacks on the World Trade Center on 9/11.

On May 12, 2020, Dr. Anthony Fauci, director of the US National Institute of Allergies and Infectious Diseases (NIAID), warned the US Senate about the dangers of reopening the country too soon.

"There is a real risk that you will trigger an outbreak you may not be able to control," Fauci said, "[it] but could even set you back on the road to try to get economic recovery. It would almost turn the clock back instead of going forward."

In May and June of 2020, some countries—including the United States—began relaxing restrictions and reopening businesses. On June 22, 2020, the Washington Post updated its state-by-state overview of COVID cases and precautions. As testing becomes more widely available, and communities begin to emerge from the shut-down, cases several states reported both increasing numbers of cases and fatalities. Those states include: Arizona, Arkansas, California, North Carolina, South Carolina, Tennessee, and Texas. For the first time since June 7, 2020, fatalities started to increase rather than follow a downward trend, according to the Washington Post.

As of June 25, 2020, the worldwide COVID infection total was 9.49 million confirmed cases, including 484,155 deaths. In the United States, confirmed COVID cases numbered 2.4 million, with 122,238 known deaths, according to Johns Hopkins University. Given those numbers, roughly 5 percent of all cases result in death.

In August of 2020, President Vladimir Putin of Russia announced the release of a COVID vaccine named Sputnik V, which had been fast-tracked through its trial process. In September of that year, Russian scientists shared their data, which claimed that the vaccine was safe for test subjects and triggered an immune response, according to the New York Times. Whether Sputnik V actively prevents coronavirus infections has yet to be determined. Several other trials are in process.

In the fall of 2020, confirmed COVID cases reached more than 27.6 million worldwide with nearly a million deaths (898,757), as of September 9. Cases in the United States reached 6.3 million, with 189,972 deaths, according to Johns Hopkins University.

On November 19, 2020, more than a quarter-million Americans had died from COVID. As of November 25 of that year, that number rose to 259,045 deaths, according to Johns Hopkins University. Worldwide, the death toll had reached more than 1.4 million, with 12.5 million confirmed cases. In the United States, the CDC recommended "postponing travel and staying home" during the Thanksgiving holiday in order to fight the pandemic.

Also in November of 2020, three companies reported late-stage vaccine testing, with promising results. A collaboration between Pfizer/BioNTech produced a vaccine with a 95 percent efficacy rate, mirroring results from a vaccine by Moderna that tested 94.5 percent effective against the virus. Drugmaker AstraZeneca, in collaboration with the University of Oxford, announced that its COVID vaccine was 70-to-90 percent effective.

By January 20, 2021, COVID vaccines had just started being administered as the United States passed a grim milestone: More than 400,000 domestic deaths. The total worldwide deaths, as reported by Johns Hopkins University, stood at 2,067,611 among nearly 100 million global cases. The World Health Organization released a timeline of its response measures, as its director-general issued criticism of the vaccine’s inequitable rollout.

“More than 39 million doses of vaccine have now been administered in at least 49 higher-income countries. Just 25 doses have been given in one lowest-income country. Not 25 million; not 25 thousand; just 25,” said WHO Director-General Tedros Adhanom Ghebreyesus. “I need to be blunt: the world is on the brink of a catastrophic moral failure – and the price of this failure will be paid with lives and livelihoods in the world’s poorest countries…Not only does this me-first approach leave the world’s poorest and most vulnerable people at risk, it’s also self-defeating.”

"We have to resist viewing each life as a statistic or a blur," said US President Joseph Biden.

Worldwide, the death toll totaled almost 2.5 million, according to the Johns Hopkins University.

In the last week of April 2021, a reported 29 percent of the US population had been vaccinated—with 43 percent of adults receiving at least one dose, according to the CDC. Worldwide, more than 1.08 billion vaccination shots have been given, reported Bloomberg.

During a time of hopefulness and new mask guidelines, spikes in places like India have raised concern over viral variants.

The A1 Verse: The herd shot round the world 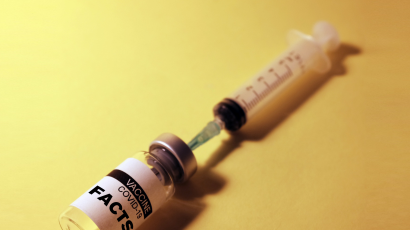 The A1 Verse: On the plains of hesitation

Could the bioweapons treaty be another tool for addressing pandemics?

Can vaccinated people transmit COVID-19? The answer will be key to ending the pandemic

The A1 Verse: The loneliness of the socially distanced runner

A GDP for nature: How measuring the health of the natural world might prevent the next pandemic

WHO: COVID-19 didn’t leak from a lab. Also WHO: Maybe it did

Radiation illnesses and COVID-19 in the Navajo Nation