On March 11, 2011, a magnitude 8.9 earthquake centered off the northeast coast of Japan caused a tsunami that flooded the Fukushima Daiichi Nuclear Power Plant, causing a blackout and meltdowns in three of the station’s six nuclear reactors.

“Design mistakes, a poor safety culture, and human error exacerbated the situation. And it all happened within the span of an hour,” wrote Subrata Ghoshroy in the Bulletin.

The accident was the worst nuclear disaster since Chernobyl in 1986.

The three boiling water reactors—originally designed by General Electric and maintained by the Tokyo Electric Power Company (TEPCO)—that were operating on that day automatically shut down following the earthquake. The reactors were still hot, however, and so backup emergency diesel generators switched on to continue pumping water through the system to cool the reactor cores. Not long after, however, these generators failed (due to damage from the tsunami).

As a result, wrote physicist Frank von Hippel, there was no power for pumping outside water through the heat exchangers. That meant that the heat generated by the residual radioactivity in the fuel continued to increase. The pressure in the reactors therefore began to rise and their pressure-relief valves were opened to relieve this pressure.

That caused the water levels in the three reactors to fall, uncovering their fuel, which overheated and released some of its reactivity into the containment. The steam pressure within the containment also built up to the verge of bursting.

TEPCO received permission from Japan’s government to release some of the gas from the containments. Because this gas contained radioactivity, the surrounding population was evacuated out to a distance of 20 kilometers (12 miles).

“Fortunately, the release was orders of magnitude smaller than occurred at Chernobyl,” wrote physicist von Hippel. “Much of the radioactivity was still trapped in the fuel and most of what was released probably dissolved in the water. Most importantly, the wind blew the plume out to sea.”

The venting process, however, also released hydrogen from the reactor vessel, where it mixed with ambient air. Eventually enough hydrogen built up that it reached explosive concentrations. From March 12 to March 15, three reactor buildings exploded, releasing further radiation into the atmosphere.

A year after the accident, a Japanese parliamentary panel issued a report that called the disaster “man-made.”

“The Fukushima nuclear power plant accident was the result of collusion between the government, the regulators and TEPCO” read the report. “They effectively betrayed the nation’s right to be safe from nuclear accidents.”

Visiting the area in 2015, Ghoshroy noted: “In reaching Tomioka—badly hit by the tsunami—we found a nearly destroyed town invoking an image of the Apocalypse. All we saw were homes, businesses, and shops as they stood or fell after the tsunami hit and then the radiation struck. There was no sign of life other than decontamination workers going about their grim task.”

Japan is still struggling with the aftermath of Fukushima nuclear disaster, wrote professor Tatsujiro Suzuki of Nagasaki University, Japan, in 2019.

“The Japanese government and nuclear industry have not solved the many technical, economic, and socio-political challenges brought on by the accident,” he wrote. “More worrying, they continue to put special interests ahead of the public interest, exacerbating the challenges and squandering public trust. The longer these issues remain unsolved, the more difficult it will be to restore this trust.”

A close call at Ukraine reactor: On luck and nuclear disasters

It’s not radioactive Disneyland: Visit Chernobyl, but respect it.

Chernobyl: A nuclear accident that changed the course of history. Then came Fukushima. 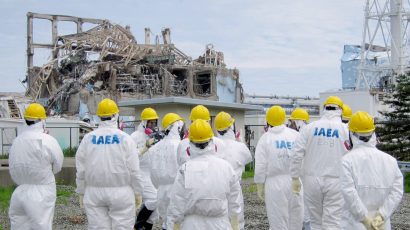 Are we ready for the unimaginable? Ensuring nuclear safety post-Fukushima