The Novel Coronavirus (2019-nCoV) is a respiratory illness first identified in Wuhan City, China. Symptoms include fever, cough, and shortness of breath. The virus can be spread person-to-person in close proximity or from contact with contaminated surfaces.

The World Health Organization (WHO) has declared the coronavirus outbreak a pandemic and has named the disease caused by the virus COVID-19. It is related to other coronaviruses such as SARS and MERS, but is not the same virus.

“The virus enters the body through the nose, mouth or eyes, then attaches to cells in the airways that produce a protein called ACE2,” according to the New York Times in its explainer “How Coronavirus Hijacks Your Cells.”

Infection by COVID-19 is rarely fatal, according to the WHO.

“It can be more severe for some persons and can lead to pneumonia or breathing difficulties,” reads a statement on WHO’s website. “Older people, and people with pre-existing medical conditions (such as, diabetes and heart disease) appear to be more vulnerable to becoming severely ill with the virus.”

On March 24, the 2020 summer Olympics in Japan were postponed. 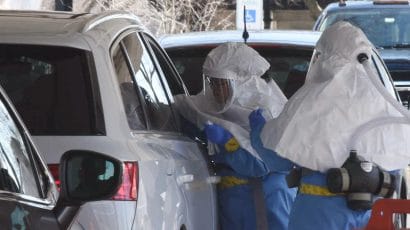