The US government caught people off guard this week by issuing a grave warning about the future of life in North America (and the whole planet) while people were focused on discount shopping. Prepared by hundreds of scientists and officially made public on November 23, the second volume of the Fourth National Climate Assessment focuses on “Impacts, Risks, and Adaptation in the United States.” It details the vast physical and economic tolls the country is already enduring and that will only worsen without action to address global warming. 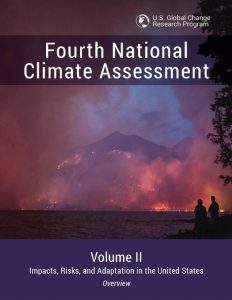 “The report is a huge achievement for American science,” Robinson Meyer writes in The Atlantic, and then goes on to ask why such important information was released “when most Americans care more about recovering from Thanksgiving dinner than they do about adapting to the grave conclusions of climate science.”

“It’s a good question with no obvious answer,” Meyer declares.

But might there be a silver lining to the otherwise poisonous timing of the Black Friday report? One potential benefit is that the details of the report can now be fully digested and cited by international delegates to the upcoming United Nations COP 24 conference on climate change in Katowice, Poland, which begins on December 3.

It’s unlikely the timing of the report’s release had much to do with the Katowice gathering. After all, the assessment—the second part of a congressionally mandated quadrennial report on climate change—was supposedly already planned to come out during the American Geophysical Union conference in Washington D.C. just one week later. But the upshot is that the United States will now be in an even clumsier position at the COP 24 talks, still trying for leverage at the negotiating table while somehow massaging Donald Trump’s indefensible views on climate.

Brutal and Extended Cold Blast could shatter ALL RECORDS – Whatever happened to Global Warming?

In addition to the planned withdrawal from the Paris Agreement, the State Department team in Poland must reckon with its counterparts’ disapproval of other decisions by the Trump administration on non-renewable energy production. The White House has reportedly organized a side event during the Katowice talks to celebrate coal and other fossil fuels, to be led by Wells Griffith, Trump’s international energy and climate strategist. It’s a lot like an event the United States arranged during last year’s climate conference in Bonn, Germany that Michael Bloomberg (the former New York mayor and now UN Special Envoy for Climate Action) described as “promoting tobacco at a cancer summit.”

But the difference now is that every other delegation will have the US government’s own dire climate assessment in hand when it comes time to discuss the importance of meeting carbon emissions targets and improving financing for climate adaptation. Seen in that light, and coming on the heels of the IPCC’s alarming special report on global warming of 1.5 degrees and the devastating wildfires ravaging western states, the unexpected release of the climate assessment before COP 24 could start to look a bit like the government trolling itself.