“America’s doctor” on the coronavirus outbreak: “it’s going to get worse” 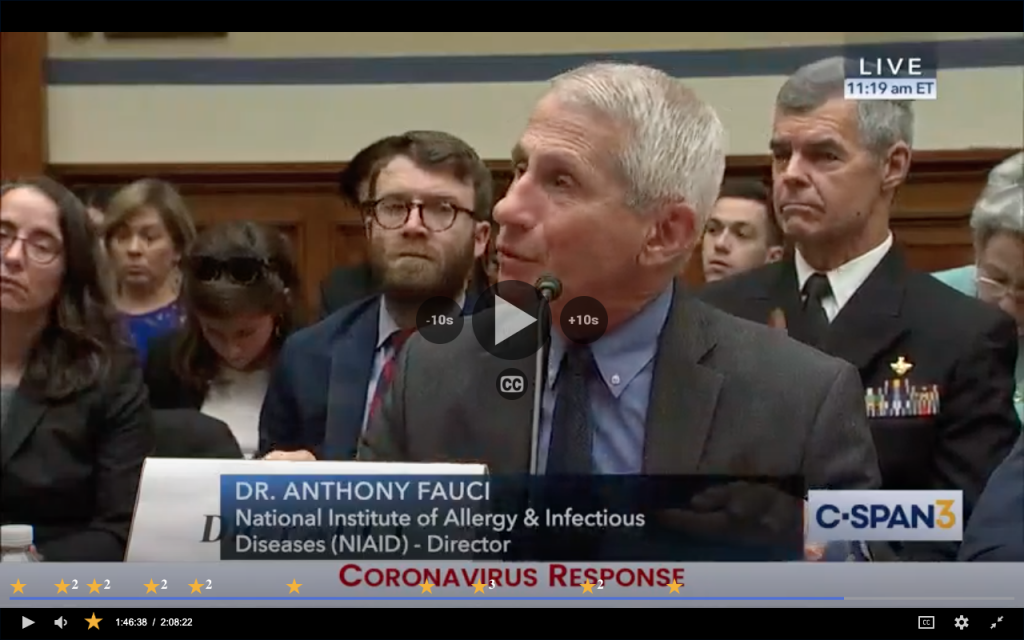 Anthony Fauci testified before the House Oversight and Reform Committee on March 11.

If you want to know what’s happening with COVID-19, ask America’s doctors. Not America’s politicians.

That’s what the House Oversight and Reform Committee did yesterday, taking testimony from some of the nation’s most prominent public health experts: National Institute of Allergy and Infectious Diseases Director Anthony Fauci (Committee Chairwoman Carolyn Maloney introduced him as “America’s doctor”), Centers for Disease Control and Prevention Director Robert Redfield, and other top federal health officials.

The hearing was interrupted when the expert witnesses were called to a meeting at the White House. After a recess, part 2 of the hearing began with Maloney’s announcement that the World Health Organization had officially declared the coronavirus outbreak to be a pandemic, and the number of confirmed US cases had skyrocketed to 938. The hearing was then further postponed, because Fauci and Redfield were unable to return to Capitol Hill. It will resume today.

"We have therefore made the assessment that #COVID19 can be characterized as a pandemic"-@DrTedros #coronavirus pic.twitter.com/JqdsM2051A

“We’ve got two enemies in this crisis; one is the virus and one is misinformation about the virus,” said Maryland Congressman Jamie Raskin at the hearing. He then asked Fauci whether there is any chance we will have a vaccine in a few months. Fauci responded with an unambiguous no. Here are a few other takeaways from part 1 of Fauci’s testimony about the coronavirus outbreak:

I can say we will see more cases and things will get worse than they are right now. How much worse we’ll get will depend on our ability to do two things: to contain the influx of people who are infected coming from the outside and the ability to contain and mitigate within our own country. Bottom line, it’s going to get worse.

I cannot predict [how many people will get this virus and how many will die]. It is going to be totally dependent upon how we respond to it . . . If we are complacent and don’t do really aggressive containment and mitigation, the number could go way up and be involved in many, many millions.

We do not know what this virus is going to do. We would hope that as we get to warmer weather it would go down. But we can’t proceed under that assumption. We’ve got to assume that it’s going to get worse and worse and worse.

The seasonal flu we deal with every year has a mortality of 0.1 percent. The stated mortality overall of this [COVID-19] when you look at all the data, including China, is about 3 percent. It first started off as 2 and now 3. I think if you count all the cases of minimally symptomatic or asymptomatic, that probably brings the mortality down to around 1 percent. Which means this is ten times more lethal than the seasonal flu.

If we don’t do very serious mitigation now, then what’s going to happen is that we’re going to be weeks behind and the horse is going to be out of the barn. And that’s the reason we’ve been saying, even in areas of the country where there are no or few cases, we’ve got to change our behavior. We have to essentially assume that we are going to get hit. And that’s why we talk about making mitigation and containment in a much more vigorous way.

Dawn Stover is a contributing editor at the Bulletin. A science writer based in the Pacific Northwest, her work has appeared in Scientific American, Conservation, Popular Science, New Scientist, The New York Times,... Read More