Why do politicians keep breathing life into the false conspiracy theory that the coronavirus is a bioweapon? 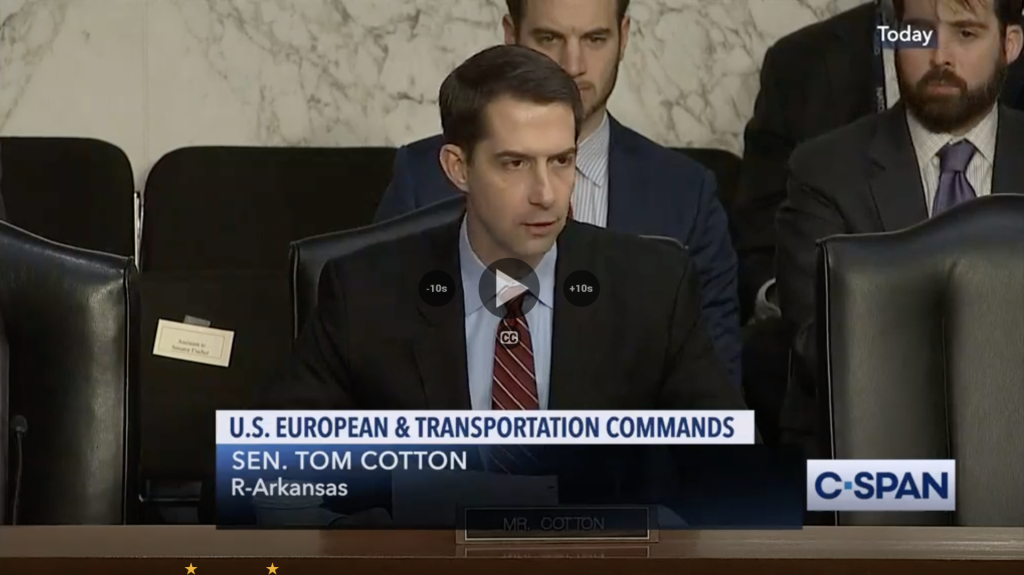 US Sen. Tom Cotton is one of the prominent politicians from countries around the world who have spread the idea that the coronavirus is actually a bioweapon. Credit: C-SPAN.

Editor’s note: Don’t miss our special report, produced in collaboration with The New Yorker magazine, on the questionable safety of biological laboratories, “Hot Zone in the heartland?”

You’ve probably heard the rumor: The new coronavirus is a bioweapon. Some malicious country—perhaps the United States, maybe China, depending on who’s talking or tweeting—purposefully unleashed the virus that causes Covid-19 on the world. You might have also heard that the idea was widely dismissed by disease and defense experts. A good bioweapon, some note, wouldn’t spread as easily and indiscriminately as the new coronavirus does. But for political opportunists and conspiracy theorists, the rising number of Covid-19 infections, the growing ranks of the dead, and the mass disruptions to the daily rhythms of life have created fertile conspiratorial ground.

The Covid-19 bioweapon conspiracy theory has not only failed to be debunked; it even seems to be getting a second wind, and prominent politicians from countries around the world are embracing it. “For a while, it seemed the pushback on the bioweapons narrative from the Washington Post and Foreign Policy was effective,” biodefense researcher Filippa Lentzos said. “But in recent days, the narrative seems to be coming back with a vengeance.” Current and former government officials, including former Iranian president Mahmoud Ahmadinejad, US Sen. Tom Cotton of Arkansas, and others have given credence to some version of the theory in the last month.

In the United States, Cotton isn’t fully letting up on his suggestion last month that the virus was a Chinese military creation. In a Fox News interview in February, he appeared to suggest just that, before walking back the idea, sort of. (In a series of tweets, he said the bioweapon theory was just one of several hypotheses.) Bioweapon or not, Cotton still believes someone is responsible for the pandemic, someone Chinese. In a statement Thursday announcing that he’d be temporarily closing his Senate office, he called the virus the “Wuhan coronavirus” five times, vowing, “We will hold accountable those who inflicted it on the world.” In a later clarifying tweet, he said that, yes, he meant China.

A March 12 article in Britain’s Express tabloid added fuel to fire, reporting that University of Illinois law professor Francis Boyle, who helped draft the legislation that implemented the Biological Weapons Convention in the United States, had identified a “smoking gun” that showed the coronavirus was a bioweapon leaked from a Chinese research lab near Wuhan, the city where the outbreak originated. Boyle reportedly based his theory on a paper on ScienceDirect that noted a “gain-of-function” in the virus that makes it better than other coronaviruses at spreading among humans. But as the Express itself notes in a correction, the research paper Boyle cited does not speculate on what caused the gain-of-function in the virus. “It was therefore incorrect when our article claimed ‘the paper suggested Covid-19 has been tampered with,’” the correction notes.

That didn’t stop Manish Tewari, a prominent Indian parliamentarian and spokesperson for the Indian National Congress, the country’s leading opposition party, from re-tweeting the Express article to his more than 380,000 followers, adding his own highly charged twist: the disease outbreak is a terrorist act.

“CoronaVirus is a bioweapon that went [rogue] or that was made to go [rogue]. It is an act of terror,” Tewari tweeted on March 12. “International investigation conducted either under auspices of ICJ or ICC is necessary to unearth the truth & bring focus back on eradicating Biological Weapons.”

CoronaVirus is a bio-weapon that went rouge or was made to go rouge. It is an act of Terror. International investigation conducted either under auspices of ICJ or ICC is necessary to unearth the truth & bring focus back on eradicating Biological Weapons. https://t.co/UWX5I5ftx0

Lentzos worries that the parade of prominent figures promoting the bioweapons conspiracy theory could weaken the global taboo against possessing bioweapons—making biological weapon research appear to be widespread. “It’s being pushed at senior political levels, most prominently from Iran, but also from Russia and to some extents China,” she said. “It’s important we call this out. We can’t afford to have it seem like states have bioweapons and are getting away with it, or even that states would want to pursue these sorts of weapons. It significantly degrades the taboo against biological weapons.”

In early March, Iran had over 3,500 confirmed cases spanning all 31 of its provinces, and Iranian officials began jumping on the bioweapons conspiracy bandwagon. Hossein Salami, the commander of Iran’s Revolutionary Guard said that the Covid-19 outbreak was “perhaps a bioterror attack” carried out by the United States. The following day, a conservative Iranian lawmaker repeated the claim, telling an Iranian state-run news outlet that the virus had been intentionally spread throughout Iran and China and proposing an independent bioterror defense organization.

Mahmoud Ahmadinejad, the former Iranian president who seems unable to resist a good opportunity to propagate falsehoods (even Al-Qaida once asked him to stop making things up), also got in on the coronavirus conspiracy action. In an open letter to the UN secretary-general, he wrote that it was clear that the virus was “produced in laboratories … by the warfare stock houses of biologic war belonging to world hegemonic powers.”

It is clear to the world that the mutated coronavirus was produced in lab, manufactured by the warfare stock houses of biological war belonging to world powers,& that it constitutes a threat on humanity more destructive than the other weapons that target humanity.@antonioguterres pic.twitter.com/lLLzvdMAGo

Naturally, it didn’t take long for these conspiracies to percolate to the top. On March 12, Iran’s supreme leader issued an edict endorsing the idea that “this incident might be a biological attack” and creating a “health and treatment headquarters” within the armed forces to help control the spread of the virus.

High-ranking officials spreading conspiracy theories about the origins of the new coronavirus has been a hallmark of the pandemic. The Chinese government, the bogymen in Cotton’s telling, has at least one prominent conspiracy-monger in its ranks. On March 12, Lijian Zhao, a spokesman for China’s Ministry of Foreign Affairs, wrote, without evidence that, “It might be US army who brought the epidemic to Wuhan.”

2/2 CDC was caught on the spot. When did patient zero begin in US? How many people are infected? What are the names of the hospitals? It might be US army who brought the epidemic to Wuhan. Be transparent! Make public your data! US owe us an explanation! pic.twitter.com/vYNZRFPWo3

The new coronavirus is thought to have jumped from animals to people, but researchers still haven’t pinned down which species to blame. The pangolin, an ant-eating animal prized for its meat and scales in China, is one candidate, according to an article in Nature. But scientists haven’t found a close-enough genetic match between viruses found in pangolins and those found in humans to reach a definitive conclusion

And so the source of Covid-19 remains ambiguous, and, like a certain US senator from Arkansas, conspiracy theories thrive on ambiguity.

“We ought to be transparent with the American people about all this,” Cotton said last month to defend his controversial musings. “Maybe some of these so-called experts think they know better. I don’t. And they really don’t either.”

Editors note: A previous version of this article implied that Lijian Zhao, a spokesman for China’s Ministry of Foreign Affairs, supported the false conspiracy theory that the coronavirus was a bioweapon. Instead, Zhao made an unfounded allegation that the US Army was involved in beginning the outbreak.

So you don’t know the source (“the source of Covid-19 remains ambiguous”) yet you are absolutely certain it cannot have been part of a sloppily managed bioweapons program. It’s mere coincidence that SARS and all the others came from the far south of China, and this is the only one that just happened to original from pangolins in a wet market a few kilometers from China’s only coronavirus BSL-4 laboratory. You’re sure. You guys would make great homicide detectives, just take the butler’s word for it and case closed. Anyway, thanks a lot, that’s a big relief. I rest easier… Read more »

So the only evidence that this was a man-made virus is that it came from the same city as a virus research lab. That’s it?

The lab in China the US claims is responsible for the virus, is the site of a joint program between France and China. The French government has made it clear than the US claims are bogus, and there is no evidence whatsoever that the virus emanated from the site

Well this isn’t aging well. Is it?

How did Matt Field and John Krzyzaniak “falsify” what they called a “theory?” Are we beyond science here? Was that the whole point? Propaganda first, science second? That seems like a rock-solid hypothesis on my part.

Air quality surveillance and control: How to improve the response to all respiratory diseases, COVID-19 included

Rejecting survival: How Trumpist denials of the COVID catastrophe impede recovery and renewal

Whistleblower: Facebook undermines kids and democracy. Will Congress do something?