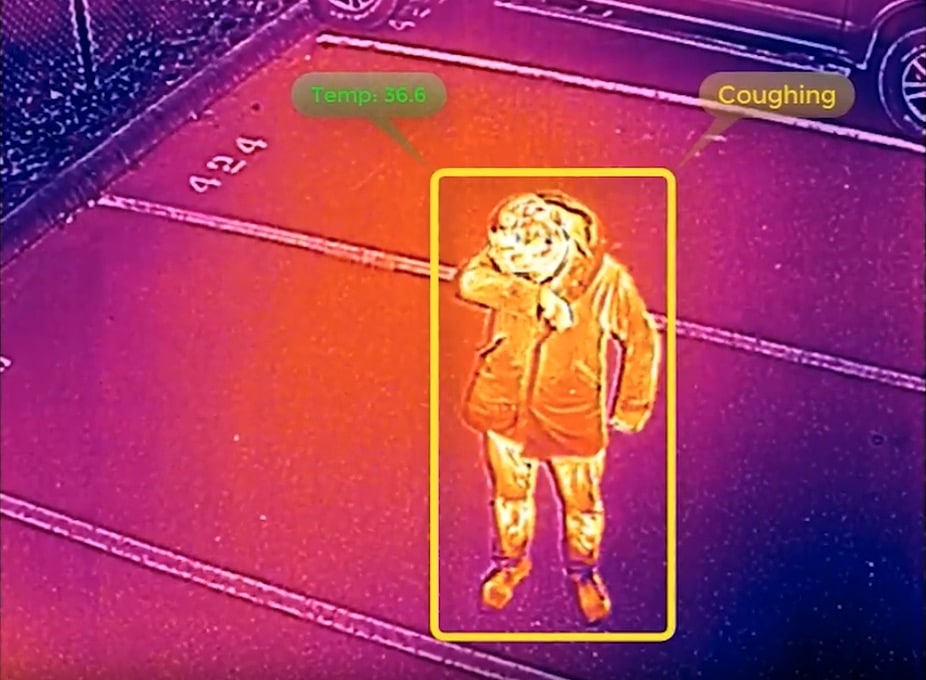 Lines of supermarket shoppers, six feet apart from one another, wearing masks and clutching carts with surgical gloves. Horrifying photos of trucks carrying victims of COVID-19 from hospitals. Normally bustling city streets that have fallen eerily silent. As coronavirus makes its way around the world, scenes people once paid full ticket price to watch at movie theaters have become the sinister reality of a crisis unseen since before movies had sound.

And straight from a dystopian film script—as successive lockdowns have been declared across the world from Wuhan to Lagos—authorities have begun turning to loudspeaker-equipped flying drones to enforce social distancing rules, a 2020 version of the van with a bullhorn on the roof, bellowing emergency alerts.

France24’s Sam Nunn compiled police footage shot by drones in China, Indonesia, and European countries like Italy, France, and Spain. Chinese police deployed quadcopter UAVs early in the crisis, even directing personalized scolding at people walking outside. Elsewhere, the buzzing beasts hover ominously over upright citizens engaged in seemingly innocent activities like shopping or getting some fresh air—but also violating the strict restrictions now working to slow transmission of the virus and prevent healthcare systems from becoming more overwhelmed than they already are. Authorities in Britain were criticized last week for sending drones flying over visitors to a park and then shaming them by posting the footage on Twitter:

Despite posts yesterday highlighting issues of people still visiting the #PeakDistrict despite government guidance, the message is still not getting through. @DerPolDroneUnit have been out at beauty spots across the county, and this footage was captured at #CurbarEdge last night. pic.twitter.com/soxWvMl0ls

With new technologies to combat the spread of coronavirus being developed at a brisk pace, it’s inevitable that specialized UAVs would come, too. A “pandemic drone” that can supposedly scan crowds of people to monitor temperature, heart rates, coughing and even blood pressure is being developed by the North American company Draganfly, based on technology from the University of Australia and Australia’s Department of Defence. Drones are even being used to spray antiviral disinfectant over public spaces, but experts question their utility, or even safety. (So far, the US Defense Department is not interested.)

RELATED:
RELATED: What can a pandemic teach us about nuclear threats?

Some in the United States welcome the drone. Last week, a California police force outside San Diego announced it will attach speakers and night vision cameras on drone units purchased from DJI—a Chinese company and one of Draganfly’s biggest competitors—which last week activated a disaster relief program “to equip public safety agencies across the United States with the right equipment and support that enables our first responders to scale their UAV operations at this unprecedented time.” Private organizations like the Airborne International Response Team and DRONERESPONDERS promote drones as a literal deus ex machina for all sorts of problematic tasks, with social-media hashtags like #dronesforgood.

Under normal circumstances, many Americans—who have an even stronger constitutional allergy to government surveillance than the British—would likely be outraged to see creepy flying police robots following them around outside and worry about what they might be used for after the COVID-19 emergency is over. But these are not normal circumstances, and social distancing functions like millions of fingers in the dike, preventing the pandemic from getting worse.

And things could certainly be worse. Hungarians now live in an Orwellian dictatorship after their government effectively dissolved itself to enable a sweeping crackdown against the virus. On the other end of the spectrum, citizens of Belarus live in a parallel universe in which their president boasts no viruses can be seen “flying around” at all.

If drones do begin to hover over US streets to help control this pandemic, it will be yet another visible reminder that we’ve entered a public health Twilight Zone where Americans have no better option than to embrace what was once only imaginable, and never real.

Podcast: Nuclear weapons at the brink

Prominent nuclear scientists did not recommend the atomic bombings of Japan

The atomic bomb and common security

The A1 Verse: Tragedy from Texas to Transylvania

Profiting from panic: the bizarre bogus cures and scams of the coronavirus era

The A1 Verse: the pandemic that ate the economy

Assessing the US government response to the coronavirus

Podcast: Nuclear weapons at the brink

The atomic bomb and common security

A statement on the bombings of Hiroshima and Nagasaki

By Bulletin Science and Security Board | Hiroshima & Nagasaki, Nuclear Weapons

The Bulletin archives on Hiroshima and Nagasaki

Watch Now: Why the atomic bombing of Hiroshima would be illegal today Global Webinar