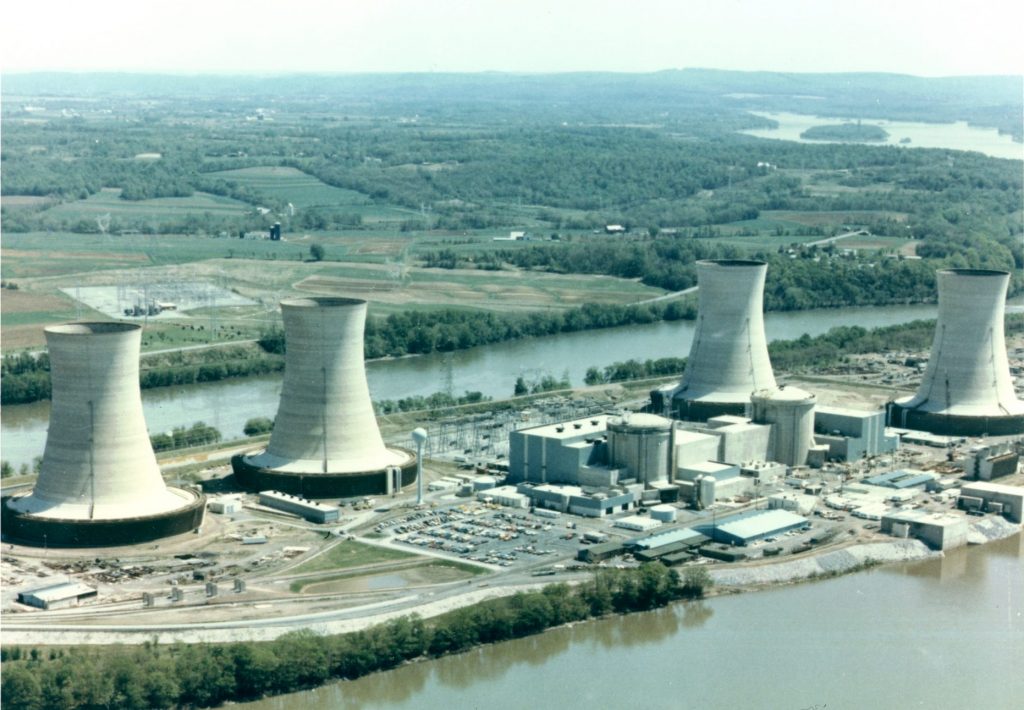 The Three Mile Island nuclear plant partially melted down in 1979. The accident demonstrated flaws in the "defense in depth" principal that guides the design of nuclear power plants. Credit: US Nuclear Regulatory Commission. CC BY 2.0.

Nuclear power plants are designed in accordance with the concept of “defense in depth,” which refers to multiple layers of protection aimed at reducing risks to both the public and workers. The defense-in-depth strategy places priority on the prevention of accidents and, if they cannot be prevented, on the mitigation of their consequences.

The Three Mile Island accident in 1979 helped to identify weaknesses in defense in depth; a reactor core did partly melt down, and some radiation did escape from the reactor. The 1986 Chernobyl disaster illustrated not just the consequences of inadequate defense in depth, but the need for a safety culture in the operation of nuclear power plants. And the 2011 Fukushima disaster showed that nuclear power plants can fail even when they are designed to accord with defense-in-depth principles.

One fundamental cause common to the Three Mile Island, the Chernobyl and Fukushima accidents is fire involving the zircaloy (zirconium alloy) cladding of nuclear fuel assemblies. In light water reactors, a failure in the cooling system for nuclear fuel leads to an increase in the temperature of the fuel. If cooling is not reestablished, the fuel can heat to temperatures on the order of 1,000 degrees Celsius. At this temperature, the zirconium cladding begins to react with air in a highly exothermic chemical reaction called zirconium fire. Hydrogen is produced as water vapor reacts with the hot zirconium cladding. When the hydrogen concentration exceeds a certain level, a hydrogen explosion can occur, damaging the fuel and releasing radioactive vapors from the reactor vessel. Depending on the circumstances, those vapors could be carried throughout the containment building and into the surrounding environment.

Zirconium fire involving nuclear fuel can also occur in spent fuel pools—a dire possibility that almost occurred in the spent fuel pool of Fukushima unit 4 in 2011. If a spent fuel pool fire had occurred there, the release of its full inventory—about 900 petabecquerels (PBq) of Cs-137—would have been roughly 100 times larger than the six to 20 PBq released to the atmosphere from the core meltdowns in Fukushima’s Units 1, 2 and 3.

As long as world nuclear industries use nuclear fuel with zircaloy cladding, such nuclear accidents are inevitable. And these nuclear accidents would not have to be caused by human error or natural disasters like the tsunami that led to the Fukushima meltdowns. Similar results could be wrought by military or terrorist attacks, or by sabotage that disables nuclear power plants’ safety equipment, including the cooling and power systems.

Although it may not be possible to prevent nuclear accidents in advance, their consequences could be largely mitigated by moving spent fuel from the pools after five years of cooling into dry cask storage, and by avoiding dense-packed pool storage. In addition, world nuclear industries need to develop accident tolerant fuels that can sustain their integrity during a loss of cooling water and not be subject to zirconium fires.

Yes, the spent fuel pools around the country are filled to the brim. Thanks to the NRC/lapdogs for allowing industry to just continue creating even more of this toxic forever waste….that has no where to go. Transferring the used highly radioactive poison to dry casks sounds better…..but if they are using 1980’s designed casks, then it’s not a sound plan. Again the lapdogs put the cart before the horse…..they are still waiting on the science. Shaking head. One test canister that will supposedly be opened after the end of the demonstration project, in 2027. https://eprijournal.com/spent-nuclear-fuel-storage-demo-heats-up/ Frankly it’s simply time to… Read more »

Jungmin Kang is an independent consultant and South Korea’s member of the International Panel on Fissile Materials and a former chairman of South... Read More

Chernobyl is still changing: Four enduring stories and a recent one

Four unanswered questions about the intersection of war and nuclear power

Is a shadow presidency fueling the gas-prices fire in oil-rich Kazakhstan?