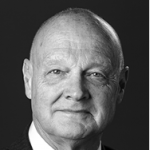 James O. Ellis, Jr. is a fellow at the Hoover Institution, focusing on energy and national security policies. In 2004, Admiral Ellis completed his 39-year Navy career as Commander of US Strategic Command. His service included carrier-based tours with three fighter squadrons and command of a nuclear-powered aircraft carrier. He has two graduate engineering degrees, is a graduate of the Navy Nuclear Power Training Program, and is a member of the National Academy of Engineering. From 2005 to 2012 he led the Institute of Nuclear Power Operations (INPO) during the Fukushima response.