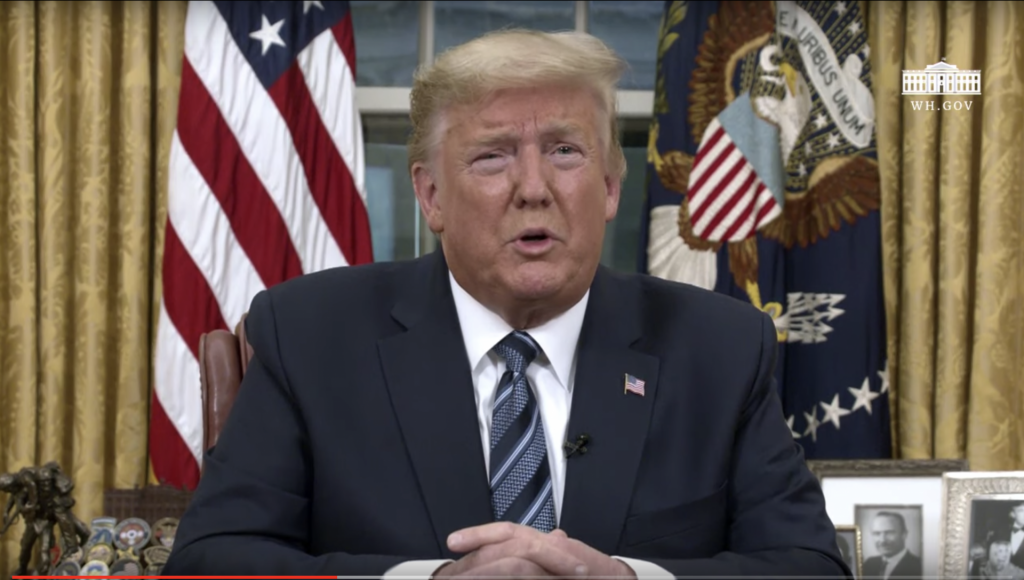 Beaming in from the Oval Office Wednesday night was a transformed Donald Trump. Gone, at least momentarily, was the perpetually aggrieved president who even during crisis or in solemn times trashes his opponents and seeks to settle scores. Gone too was the Trump who has consistently downplayed the risks of COVID-19 and suggested things are pretty much ok. As the World Health Organization made clear by calling the outbreaks of coronavirus spreading in countries around the world a pandemic, everything is far from ok.

Yes, Trump injected into his address a bit of controversial nationalism, pinning the COVID-19 crisis on a “foreign virus.” Yes, he overstated by a long-shot how comprehensive his new European travel restrictions will be. And yes, the president’s call for unity in the face of adversity was off-brand for someone who just a few months ago called House Speaker Nancy Pelosi’s home district, San Francisco, a “dangerous and disgusting Slum.” But Trump at least seemed subdued, like he was accepting the gravity of a disease that could tear through the country, possibly infecting millions and killing thousands. During his prime-time address, Trump misled. But his worried look made one thing clear: We too should be worried.

To get a public health perspective on how well the United States’ is handling the COVID-19 crisis, I talked Thursday with biodefense and hospital infection control expert Saskia Popescu. She told me a little about what she’s seeing on the front-lines of the fight and shared some thoughts on how the outbreak will end.

Bulletin: Trump issued new restrictions on travel from Europe and talked up the supposed success of his previous Chinese travel restrictions last night. Are those the kind of measures that come off as easier for folks to put their minds around?

Saskia Popescu: The harder aspects of disease mitigation and response are having those tough conversations with people about how it’s really important for you to stay home when you’re sick. People don’t like being inconvenienced. And that’s why it’s so challenging and frustrating sometimes, because if people were really good about staying home when they’re sick and engaging in social distancing and infection control measures like hand hygiene and not touching their face, that would be very, very impactful to outbreak response at this point. I think focusing on that travel ban, that travel association is a moot point now. The disease is pretty much everywhere.

Bulletin: The US Centers for Disease Control and Prevention (CDC) guidance on what to do if you are sick—that is, stay home, etc.—that all makes theoretical sense, but in practicality the guidelines don’t seem easy to follow. My kids go to daycare, where the rule-of-thumb is if they have diarrhea, or if they have a fever, they stay home. Kids come to daycare with waterfalls of mucus pouring down their faces. In the workplace, a lot of people will go to work with a cold. In fact, you know, there’s sort of like this idea that if you aren’t working just because of a cold, then you’re weak.

RELATED:
White-tailed deer are getting coronavirus infections: How big of a problem is that?

SP: That’s such a good point, because it speaks to a bigger issue in American work culture: that need to go to work sick, because we don’t get enough time off. We don’t have a work culture that encourages people to stay home and do self-care. I think that’s a bigger social issue for sure. And unfortunately, that has very real public health implications, especially right now.

Bulletin: There’s a lot of concern about how widespread testing is. Could the tests for the coronavirus have been made more available earlier?

SP: I can’t speak to the logistics of that. I do find it really worrisome. I’m hard pressed to find a single person that isn’t frustrated just by how delayed the US was in building a testing infrastructure. I mean, we’re like seven weeks behind.

Bulletin: Where is the country with the availability of testing now and how widespread is it?

SP: What we’re being told from a health care perspective is, if you have a patient that meets the very specific CDC criteria for a patient under investigation, that will be run at the state lab. And that’s a much faster test. But you have to get approval by the state health department, by the county health department, to run it there. If that patient doesn’t meet that criteria, then you can run it commercially, it’s just going to take three to five days.

Bulletin: You work in a hospital in infection control. What are you seeing in terms of people coming in with COVID-19 concerns?

SP: I think we’re all consistently seeing a lot of people coming in with very, very mild illness, saying they think they have it, or they think they were exposed to someone, or just demanding the test. And we can’t necessarily do that. We’re working to get more commercial testing online…

So, I’ve seen a lot of people with very, very mild illness coming in wanting testing out of fear. And I think that’s particularly hard because if there wasn’t COVID-19, these people would not be coming into the emergency department.

Bulletin: So, after emergency room personnel put on all their gear and take patients to isolation rooms, they’re told they don’t meet criteria for a test and are told to go home?

SP: Pretty much… We would always put on a mask and gloves for any patient that has respiratory infection. That’s been standard practice for decades. So that’s always going to happen. But the hard part is right now, where we’re still so dependent on state labs, once commercial testing gets more widely available, then we could at least catch that person and just tell them look, you need to stay home while you’re sick. And you’ll get the lab results in like three to five days.

RELATED:
The A1 Verse: Burnt Omicron, or Variants echo in the memory

Bulletin: It would be great if everyone that comes in with a respiratory condition could at least get the commercial test done, right?

SP: My guess is that, as we move more towards the model of widespread commercial availability, that’s probably what’s going to happen, but we just don’t have the capacity for that now.

Bulletin: Taking, as an example, New York state’s response to COVID-19 in New Rochelle, near New York City, where authorities have cordoned off the community but still allow people to move in and out, it seems some of the big measures governments have announced to combat the outbreak have a lot of loopholes that might impact their effectiveness?

SP: What I’m increasingly seeing is the guidance from the CDC about staying home when you are sick and those basic infection control measures you’ve heard 1,000 times now—people just don’t feel like that’s enough. They feel like they need something extra.

I think that is particularly difficult because that’s what we need people to do. And they’re just not doing it.

When I see some of these grander efforts—I can’t speak to those specific situations, because I don’t know what they’re dealing with resource-wise—but often I wonder: Is this really to give the indication that you’re trying to do something and you’re encouraging people to take it seriously or acknowledge that their government is working hard for them?

Part of the issue, too, is that we don’t have pandemics very often; we don’t get to test these responses frequently. And each [pandemic] is unique, so what we learned in the last one may not apply to this one.

Bulletin: What are the best- and worst-case scenarios for how the outbreak progresses in the United States?

SP: The best-case scenario? I think people really heed the notions of infection control, and we’re able to utilize these school closures and use these cancellations of large events and use that as a mechanism to flatten the curve. Worst-case scenario? People just keep doing what they’re doing and going to Costco to get toilet paper, but going to work sick and flooding emergency departments.

Editor’s note: The interview has been edited for length and clarity.

The A1 Verse: The silver lining now with clinging mist

Do we need a new vaccine for omicron? Fauci says not yet, other experts disagree

Are you alarmed enough by omicron? Probably not.

Amid a public health crisis, the Supreme Court could be poised to stop Biden’s vaccine mandates

The A1 Verse: The stain of love is upon the world

Pathways to a WMD-free zone in the Middle East