How Biden can improve European relations while pivoting to Asia 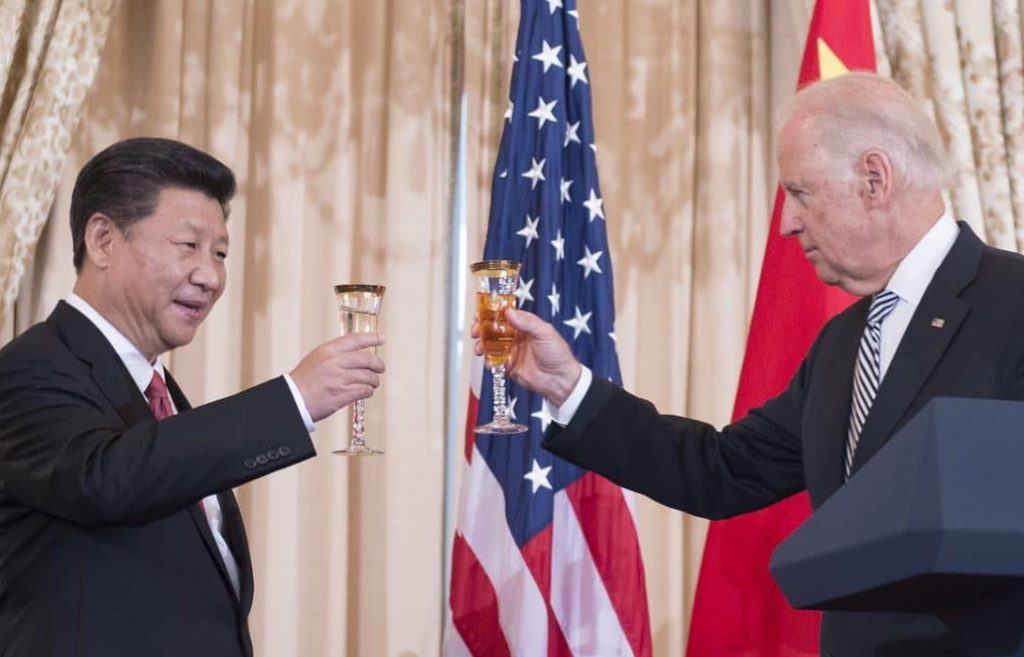 Joe Biden in 2012, when he was vice president, raises a toast in honor of Chinese President Xi at a State Luncheon at the State Department. Credit: US Department of State. Accessed via Flickr.

In September, France recalled its ambassador to the United States for the first time in the 243-year history of the alliance. Paris’ anger stemmed from the loss of a $70 billion contract, abruptly cancelled by a competing deal known as AUKUS. The deal partners the United States and United Kingdom to provide Australia with a fleet of nuclear-powered submarines. These are intended, in part, to counter growing threats from China. In the wake of the fiasco, President Joe Biden scrambled to repair diplomatic relations with the United States’ first-ever ally. Despite the US apology, France wants more. “Trust is like love,” French President Emmanuel Macron told reporters. “Declarations are good, but proof is better.”

France’s fretting should serve as a warning to the Biden administration. The US focus on East Asia continues to rock relations between Washington and its European allies. In transitioning its strategic priorities towards the Pacific, the United States cannot succeed alone. Incorporating allies and partners—including those in Europe—in the planning, negotiating, and implementation stages of its efforts to manage threats from China will be critical. The effort should also pay dividends. By restoring and reinvigorating damaged European alliances, the United States will be better positioned to manage threats in East Asia and elsewhere.

Emerging fractures in US-European partnerships. As the Taliban seized Kabul and US embassy staff raced to the airport for evaculation last August, US allies around the world watched, aghast. The bungled US withdrawal from Afghanistan sparked critical questions among members of the North Atlantic Treaty Organization (NATO) about whether reliance on US policymaking had been too unhesitant. The United Kingdom, Germany, France, and Italy complained about exclusion from the planning process and lamented the botched exit.

“Did we just think we had to follow the United States and on a wing and a prayer it would be all right?” former UK prime minister Theresa May asked.

Commentators linked the withdrawal to Biden’s goals in East Asia—and rightly so. US Secretary of State Antony Blinken said in April that a US withdrawal would be important for freeing up resources for “other very important items on our agenda, including the relationship with China.” Biden’s White House has been highly focused on East Asia, even recently opening a new CIA mission center to counter threats from Beijing.

RELATED:
Pushing back against Putin’s threat of nuclear use in Ukraine

The United States has pushed hard for NATO to refocus its attention on China, a move that has only added to growing concerns in Europe. Many of the United States’ Western allies consider China a secondary priority or even a distraction from more pressing issues—like the threat from Russia—that are closer to home.

Germany and France have “stopped short of calling China an adversary.” Although NATO formally declared China a “global security challenge,” leadership has sent mixed messages. In a recent interview, NATO Secretary General Jens Stolenberg emphasized NATO doesn’t “consider China as an adversary or enemy.” Stolenberg highlighted the need to “engage politically with China,” even while responding to the country’s maritime assertiveness and continued investments in disruptive technologies like advanced weapons systems.

The US focus on China is controversial, in part, because it comes at a moment when relations between NATO and Russia are severely strained. NATO’s Eastern European members don’t want China to “overshadow” concerns about Russia. Multiple Eastern European states have competed for additional US forces —though to little avail. Poland even offered, in 2018, to name a military base after President Donald Trump.

Restoring trust and reducing threats. Can the United States address the security challenges emanating from China while rebuilding support in Europe? Yes—if it doesn’t go it alone. The United States should better integrate European allies into foreign policy planning. Not only would this reinforce key US alliances, but it could also help address acute global security challenges, such as those involving Russia and China.

Collaboration could be key to engaging Russia on arms control and re-opening dialogue through the NATO-Russia Council. These steps could restore balance at a time when the NATO-Russian relationship “has not been more difficult since the end of the Cold War,” according to Stoltenberg. The strong, ongoing US commitment to NATO should help. The US public broadly supports the US nuclear security guarantee to NATO—even while cracks in European support have emerged. The United States might also reassure NATO allies they will not be dragged into ill-advised conflicts in the Pacific.

Reassurance shouldn’t prevent US-European cooperation on threats posed by China. The Biden administration has listed China as its top global threat—and for good reason. Chinese planes fly over Taiwan, while the Chinese navy expands efforts to control the passage of foreign vessels through the South China Sea. China has adopted a broad approach to nuclear modernization that includes the construction of new missile silos and recent tests of hypersonic missiles. These threats are pressing, and mitigation efforts are faltering. In a recent virtual summit between Biden and Chinese President Xi Jinping, Biden asked for “some common-sense guardrails.” The talks concluded, however, after little progress. The leaders could not even agree on a joint statement, and no plans for further talks on strategic stability—like those promised after June’s US-Russia summit—were announced. Yet the Biden administration must find a way to cool tensions with China and help East Asian allies peacefully navigate their own China relations.

There is good news: Revitalized US-European alliances could help improve the East Asian security environment. The United States and its European partners could push China to come to the table on arms control during the upcoming Non-Proliferation Treaty Review Conference. The United States could deepen collaboration aimed at making progress with China on major global challenges involving climate change, trade, and emerging technologies. These policies require robust multilateral cooperation to be successful.

European participation in the US security agenda for East Asia could also help repair the transatlantic partnership. By expanding consultations and cultivating transparency, the United States could improve relations with France and other European allies, finally offering Macron his “proof” of American trustworthiness.

Lauren Sukin is an assistant professor of international relations at the London School of Economics and Political Science. Her research examines the... Read More