Editor’s note: This article appeared originally in the September 1961 issue of the Bulletin. It is republished here as part of our special issue commemorating the 75th year of the Bulletin.

I have been asked by the editor to make some remarks concerning the so-called “neutron bomb” and its relevance to the problems of future weapons testing. It has been suggested there is an important difference between the public discussions now surrounding the neutron bomb and the arguments which raged in 1950 around the development of the hydrogen bomb. In 1950 opinions differed sharply concerning the feasibility and the desirability of building a hydrogen bomb, but the fact that the bomb represented a problem of extreme importance  was obvious  to  everybody.

The situation now is much more confused.

There is nothing physically self-evident about the importance of a neutron bomb, and there are many scientists who believe that this bomb, even if it were tested and stockpiled, would not produce any decisive effect upon world affairs.

I am unfortunately not permitted by security regulations to state my views upon these questions  with any precision. I therefore confine myself to general statements, involving mainly political rather than technical, judgments.

The first question to be examined is whether the hydrogen bomb in fact possessed the importance which was universally conceded to it. The answer to this question is not quite so obvious as it seems. The man in the street believes that the hydrogen bomb is important simply because it is “a thousand times as powerful as the Hiroshima bomb.” If this were all there was to it, the hydrogen bomb would not be so very important after all. To make a 20-megaton explosion from pure fission requires the fissioning of only a ton of uranium 235. If we had not invented the hydrogen bomb, and if we had thought 20-megaton  bombs to be militarily essential, we could undoubtedly have built fisson bombs of this order of magnitude. The weight and cost of such monster fission bombs would not have been prohibitive.

Why then are hydrogen bombs important? I believe their importance arises from two considerations, one technical and one political. Their technical importance lies in the general and many-sided growth of nuclear weapons technology which occurred in the decade 1950-1960. In this respect the hydrogen bomb is not a disease but only a symptom. The disease of which the hydrogen bomb is a symptom is the continuous and apparently irresistible march of technology which makes all kinds of weapons progressively more simple, more versatile, and more lethal.

The political importance of hydrogen bombs is likewise mainly symbolic, but nonetheless real. Hydrogen bombs are the symbol in everyone’s mind for overwhelming, indiscriminate destruc­ tion. If a committee of scientists should say “’hydrogen bombs are not really important, because we can destroy our enemies just as well with fission bombs,” the public would not believe them. The committee might be scientifically and technically right, but the public would be politically right. The hydrogen bomb is important for one decisive political reason: because ev­erybody knows it is important.

RELATED:
As North Korea readies for a nuclear test, does it have a new doctrine?

Now let us consider the “neutron bomb.” I do not speak here of any actual or proposed weapon, but only of general principles, well known to every nuclear physicist. If heavy hydrogen could react with itself according to the formula D+D—> He8+ n,  the energy of each neutron would be about 3 million volts. The reaction of one gram of hydrogen would yield 7 x 1017 ergs of energy in the form of fast neutrons. Converting this from physical to biological units, it means that one gram of hydrogen could in principle give five times the lethal dose of radiation to anybody within a one-kilometer radius, if neutrons were not absorbed in the atmosphere. Atmospheric absorption and scattering will change the numbers but not the orders of magnitude.

If weapons based upon these principles could be produced on a massive scale and introduced into infantry units as “standard ammunition,” I am convinced that the effects would be as important as the effects of the hydrogen bomb. The situation would be in many respects similar to the situation arising from the development of the hydrogen bomb. Again a committee of scientists could report with perfect correctness, “We do not need neutron bombs. Anything these bombs can do can be done just as well with old-fashioned bombs.”

And again the public would rightly disregard the committee’s advice. The importance of neutron bombs would lie, like that of hydrogen bombs, in their being technically a symptom and politically a symbol. Technically, neutron bombs would be a symptom of a further general advance of nuclear technology which would be pushing ahead in many different directions. Politically, these bombs would be the symbol of military power in the eyes of the world, the latest, most modern, most refined, most chillingly murderous of mankind’s instruments.

I come lastly to the problem: What policy the U.S. ought to adopt in relation to neutron bombs? In particular, this includes the question of whether and when to resume nuclear testing.

Let me begin my discussion of this problem with two clear statements of a negative character. First, I do not believe that neutron bombs are militarily advantageous to the United States, nor that they will alleviate any of our military problems. On the contrary, neutron bombs, like hydrogen bombs, will in the long run only complicate our lives, increase our insecurity, and possibly facilitate our extermination. Second, I do not support any of the arguments which have recently appeared in the newspapers claiming that the neutron bomb makes it necessary to resume testing immediately. As I see it, the neutron bomb presents a serious danger only in the long run, and we can well afford to spend a year or two in careful consideration before deciding to do anything drastic about it.

RELATED:
Why US policy on North Korea should prioritize nonproliferation, not denuclearization

Having made these two disclaimers, I must nevertheless report that in my judgment the neutron bomb does present us with a very unpleasant and difficult dilemma. The incentive to develop such bombs must be as strong in the USSR and in the People’s Republic of China as it is here. A development of this kind in the USSR or in the People’s Republic of China could be easily hidden, but in the U.S. must become publicly  known. Our  choice is, therefore, a dismal one. Either we incur the political  disadvantages of resuming weapon tests and starting a new phase of the arms race, or we deliberately accept a possibility that the USSR or the People’s Republic of China will stockpile neutron bombs several years before we do. The dilemma is not in my opinion urgent, but it exists and it will grow only more corrosive if we do not face it realistically.

Let me end by saying briefly and dogmatically what I think ought to be done. When Hans Bethe went to work on the hydrogen bomb, he advocated that we publicly declare and adopt as our permanent policy that our hydrogen bombs should never be used except in response to the use of hydrogen bombs by others. I would take the same stand on the development of neutron bombs. I would announce to the world that we shall from time to time test new types of nuclear weapons; that we shall do this not in the illusion of winning military superiority for ourselves but only in the hope of denying military superiority to others; and that we shall under no circumstances be the first to use these weapons in anger.

In the long run I do not see any way to halt the merciless advance of nuclear technology, except by complete openness in nuclear research. The objective of openness is of such overriding importance, that it is worth almost any risk to reach it. For this reason, when Khrushchev offered us complete openness in exchange for complete disarmament, we ought to have  jumped at the offer. Despite all the uncertainties inherent in disarmament, and despite all the frustrations of negotiating a detailed agreement, this is the kind of a bargain that would in the long run make sense.

Introduction: An innovative and determined future for the Bulletin of the Atomic Scientists

Interview: Nobel chemistry laureate Jennifer Doudna on the promise and peril of the genetic editing revolution

1947: How the American people feel about the atomic bomb 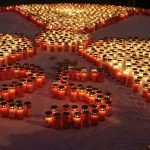