President Lyndon B. Johnson re-election campaign included the infamous “Daisy Girl” TV commercial, which depicted a future in which Barry Goldwater led the country into nuclear war. Even though it aired only once, it was viewed by millions of Americans when the major TV stations rebroadcast it on the nightly news.

Earlier in the campaign, his opponent Barry Goldwater suggested using low-yield nuclear weapons to defoliate forests and destroy supply lines in the war against North Vietnam.

In response, Johnson framed the election as a vote about nuclear policy and highlighted Goldwater’s views in campaign ads. Suddenly, voters began to view Goldwater in a much darker light, and Johnson won by one of the biggest landslides in U.S. history.

The spot was inspired, in part, by Stanley Kubrick's “Dr. Strangelove or: How I Learned to Stop Worrying and Love the Bomb” released in 1964. 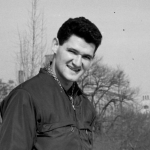